Museums are gateways to exploring the past, the present and the future. It’s not all about rare and valuable objects, sometimes it’s about the journey of discovery that an object leads you to.

Quite by chance during our last expedition to Madagascar, while searching for water beetles in a brick pit, we found several pieces of eggshell and worn bones exposed on a layer of clay. The brick pit was near the coast and the layer of clay was approximately 2.5m below ground level. There, you have everything we knew at that time. 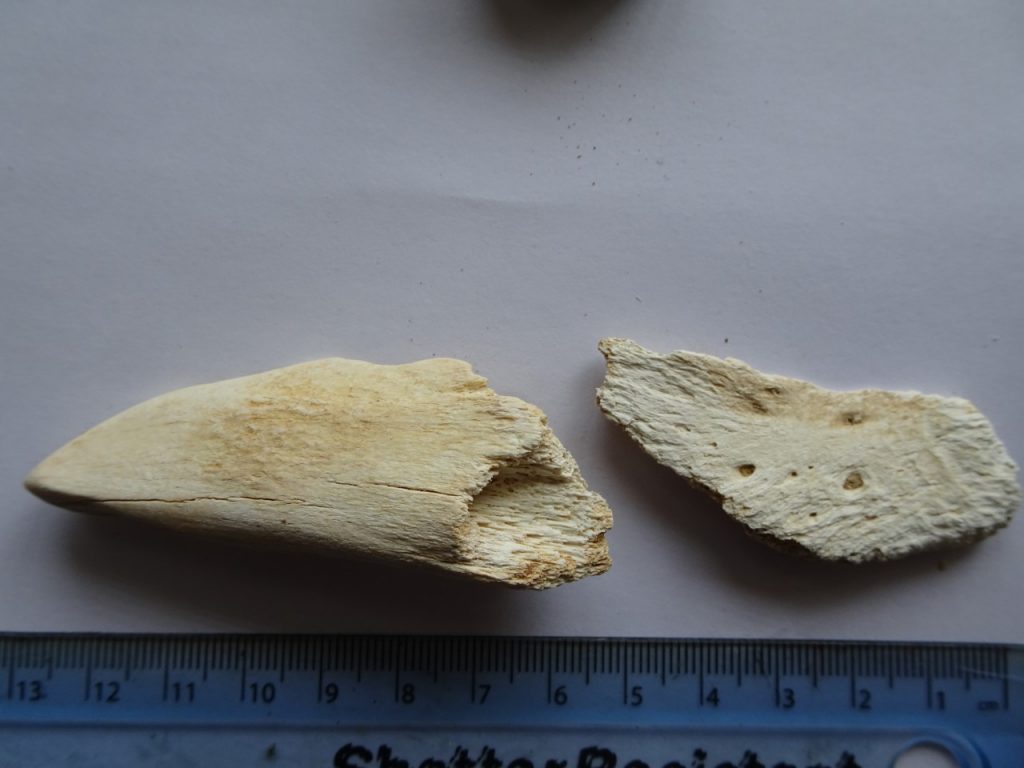 If you want to have a think about these facts and explore them further, don’t read on. Go on your own exploration. When we re-open come and have a look at the eggshell/bone fragments in our Museum, hold them if you like, use your imagination about what they are.

Ok, so you want to go follow the facts and find out more … then let’s go.

So the shell/bones were deeply buried, so we assume they must be very old, but are they? Are they fossils? Good question. Well some of the shell fragments appear to have encrusting rock. So yes, they are probably fossils.

Did they just fall into the pit after it was opened up? Good question. While some of the shell fragments lay on surface, the rest and all of the bones had to be dug out. There were none obvious on land surrounding the brick pit so, on the balance of probability, they were laid down on the clay layer and then subsequently buried.

What was overlying the shell/bones? Another good question. Well it was a thick banded layer of mixed sandy and gritty clays. We think this is likely to be alluvium – material laid down by water – but from where? To the south is a very large estuary that frequently floods, while to the west is the sea.

Any more clues? Well yes, the bones are very worn, so they may have been transported here after floating around and eroding, either in a river or along the coast. This fits with them being deposited on the clay layer, maybe after a flood or maybe after a storm? Who knows?

Is this all we can find out? Of course not, we have plenty of questions we can ask……

Maybe there are clues from the shell fragments? Yes indeed. They are very thick (around 4mm) and the curvature suggests a large egg, in fact a very, very large egg. Comparing it to the large eggs in our museum – Ostrich, Emu, Cassowary – it is bigger still.

So what could it be?

Maybe there are clues from the bones? Yes indeed. They mostly consist of a sponge-like bony centre. If you look at sections through the bones of mammals, birds and reptiles etc., they look most similar to a bird. Along with the strong outer layer and the suggested diameter of the bones, this suggests they are from a large bird. And we all know that large birds have large eggs.

So … we have fossil fragments from a large bird, from near the coast of Madagascar. And we can just go on exploring now …. The internet is full of articles on Madagascar’s famous giant bird – The Elephant Bird. The biggest bird to have ever lived.

Have we found evidence of the Elephant Bird? We have shown the fragments to Sandra Chapman, who is Curator (of the Fossil Birds, Reptiles and Amphibians Group) at the Natural History Museum in London, and she has confirmed that they do appear to be from an Elephant Bird.

So which one was ours? We have shown the fragments to Lucas Legendre, an authority of Elephant Bird bones and their histology. The bones do not have clues to the species – i.e., no crests or tuberosities – so it would require bone analysis to take the identification further. Can the Museum get this work done and continue our story?

How old are they? Elephant birds appeared on the island of Madagascar some 2 million years ago, after a prolonged period of cooling across the world made a wide range of animals evolve to increasingly larger size. In lacking effective predators, island species often grow to prodigious size. Just think of the Komodo Dragon in Indonesia.

So our fossils could be of considerable age. The best way to research their age is to use carbon dating, so we have contacted the Oxford Radiocarbon Accelerator Unit. They can analyse a single sample for around £500, so we will need to explore how to find this sum. Will we be successful?

So from just a few fragments of shell and bone, sitting in the palm of your hand, picked up by accident, we have managed to link past, present and future.

But what species of Elephant Bird do we have, could it be new to science, where were the eggs laid, can the shell/bones tell us where the birds fed or what they fed on ….

And so the journey continues……