A home for plants and wildlife….

The garden provides year round interest and colour with many unusual species to be discovered. At the front of the house, among the trees of particular interest are a Catalpa or Indian Bean Tree and the ancient Ginko Biloba, whose leaves are widely used as a herbal remedy. At the rear of the house on the east side of the garden is a mature Paulownia while on the western side a striking Chilean Fire Bush appears to be on fire when its masses of tubular red flowers appear in early summer.

The site was originally part of the native heathland with Scots Pine trees and heathers. The acidity in the soil provides ideal growing conditions for lime hating plants. Among those in the garden are Rhododendrons, Azaleas, Heathers, Skimmias, and Camellias. The Pines were felled mainly in the period 1940 -1960, having succumbed to storm damage.

The current small group of garden enthusiasts are continuing with the traditions of their predecessors, maintaining a mix of native and exotic species. It is hoped that more native wildlife can also be encouraged by selective maintenance and habitat creation.

The island bed immediately behind the house has a small ornamental pond at the centre. Despite its size, it has provided a habitat for a variety of invertebrates including fresh water shrimps, water boatmen, cyclops, water fleas, clams and snails. A larger, newer, wildlife pond at the rear of the garden provides a habitat that encourages a wider range of animals, for example, newts, frogs and various insect larvae.

The garden serves the interests of many BNSS Sections particularly bird watching, the study of insects and plants, and photography. It will no doubt continue to evolve and develop. 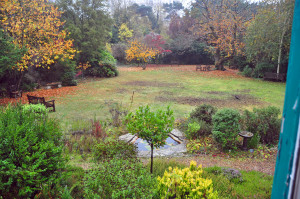